Lutherstadt Wittenberg and the entire region is inextricably linked with a name - the theologian Martin Luther. His understanding of the gospel has fundamentally changed the faith life of many Christians and the founding of the evangelical church is almost 500 years later until today, an important orientation and invitation for many people to get to know the gospel. When you witness a service in the town church of St. Mary, Luther's preaching church, you will feel it yourself - the spirit of optimism, the strength and hope of the Reformation.

However, this exciting epoch 500 years ago was much more than that - Lutherstadt Wittenberg was the center of the social upheaval of the 16th century in politics, culture, art and education, whose testimonies you can discover throughout the region. As a team of Luther-Hotel Wittenberg, we look forward to accompanying you on a journey of discovery that brings history to life.

Book a room with the very best price!

Excursion destinations in the Wittenberg region

The spa town of Bad Schmiedeberg is a state-approved bog and mineral spa. Since 1878 spa guests have been treated and cared for in the Eisenmoorbad. However, the tourism region offers many more attractions and events. More information about the region can be found here.

The former open pit area of ​​the lignite mining town of Bitterfeld has been flooded since 2002. The Goitzsche is a beautiful destination for hiking, cycling and sailing.

Christian sights and places of activity of the reformers

Named the front building of the Luther House after its founder Elector Augustus of Saxony (1526-1586). It was built from 1580 to 1582 as an extension to the Wittenberg University of Leucorea. Four years after the merging with the University of Halle in 1817, the Protestant seminary moved into the rooms. The later reformer Martin Luther had moved in 1508 as a monk to the "Black Monastery" in Wittenberg which today is the museum and seat of the Foundation.

Today's painting school in the Cranach workshop exists since 1996 in Cranach-Hof, Schlossstraße 1. This farm is located in the historic center of Wittenberg and was Cranach's most important possession. Here he and his son, Lucas Cranach the Younger, demonstrably maintained their large painting workshop. Many of his great works were created here and it is still possible to see artists working in their workshops at this historic place or to be creative in courses, projects or workshops.

The Wittenberg Bugenhagenhaus is the oldest Protestant parsonage in the world. It is one of the most important memorial sites of the Reformation and should therefore also be included in the list of UNESCO World Heritage Sites. Until 1997, the Bugenhagenhaus had been a permanent home and workplace of the Wittenberg superintendents since the Reformation. Johannes Bugenhagen lived here as the first pastor of the Reformation until his death in 1558. The friend, mistress and pastor Martin Luther is next to this and melancholy as "the third reformer". With the help of his Low German language skills, the Reformation has reached northern Germany and Scandinavia. Johannes Bugenhagen is the author of numerous church orders.

Here you will find more informationen about the Bugenhagenhaus.

The founding of the LEUCOREA Foundation in 1994 had the goal of reestablishing academic life in Wittenberg at the site where 500 years ago one of Germany's most prestigious universities was opened. From here, Luther and Melanchton initiated the Reformation.

Here you will find more information about the  Leucora University of Wittenberg!

Burning of the pope's bull by Martin Luther 1520

It is located in the east of Wittenberg's old town in a sandstone-enclosed area. The tree marks approximately the place before the Elsertor on which Martin Luther burned the Papal "Canonischen rights" and the Bannandrohungsbulle "Exurge Domine" of pope Leo X on 10 December 1520 in front of Wittenberger students. With the words "Because you have blasphemed the saints of the Lord, then consume the everlasting fire," he also externally carried out the separation from the Roman church.

UNESCO World Heritage | Residence Martin Luther. | the world's largest museum of the history of the Reformation

The permanent exhibition in the Lutherhaus offers you an encounter with the time of the Reformation. Around 1,000 original exhibits refer to the life and work of the reformer Luther, but also of his family life and his rich impact of the history.

Park of the Luterian World Alliance for the 500th anniversary of the Reformation with tree sponsorship from all over the world.


More information can be found here.

Pilgrim's way along Martin Luther's many places of work

The Luther Trail invites visitors to take a look at places of work of Martin Luther and other reformers and makes the history and effects of the Reformation tangible.

More information can be found  here.

Elector Johann Friedrich had the three-storey building built in 1536. He wanted to bind Philipp Melanchthon, the teacher of Germany, to his university. The house provided space for Melachthon's family and students. In 1845, the Prussian state acquired the building and recreated the scholar's study and death room on the first floor in 1898/99.

Visible from afar, the slender, 88-meter-high Schlosskirch tower rises from the silhouette of Lutherstadt Wittenberg and marks the western end of the old town. Approaching this castle steeple, one recognizes a filigree seemingly neo-gothic tower cap under which a mosaic stones designed banner is on the meter-sized letters. Here, the words of the hymn Martin Luthers "A stronghold is our God, a good weir and weapons" can be read. The actual castle rises rather inconspicuously next to the castle church tower on whose southern wing is also still a tower. The world-famous castle church is a UNESCO World Heritage Site and completes the entire object from the north side. She became famous when, on October 31, 1517, the hitherto almost unknown Wittenberg Augustinian monk and theology professor Martin Luther disseminated his 95 Latin disputation theses, which are regarded as triggers of the Reformation.

The parish church St. Marien at Wittenberg in Lutherstadt Wittenberg is a parish church and the preaching church of the reformers Martin Luther and Johannes Bugenhagen. Here, the Holy Mass was celebrated for the first time in German and the Lord's Supper was first handed out to the congregation "in both forms", in bread and wine. The church is thus the mother church of the Reformation. Since 1996, the parish church of St. Mary has been an UNESCO World Heritage Site.

Here you can find more  informaton about the Stadtkirche.

A series of valuable panels (epitaphs)

This altar by Lucas Cranach the Elder (1472-1553) from 1547 is a particularly impressive testimony from the Reformation period. He is almost considered as the Reformation altar.

Built to promote and nurture art and culture through the public exhibition of the Foundation's collection of classical modernist graphics with Christian themes in Lutherstadt Wittenberg.

A good deed in your sleep!

Support the work of the
Berlin City Mission with
each booking!

There is a lot of fine food in Wittenberg! Lunchtime snack, coffee to go, warm and cold meals are served at the
cafeteria at the Leucorea!

With this request you will be forwarded to our booking portal Top Connect. 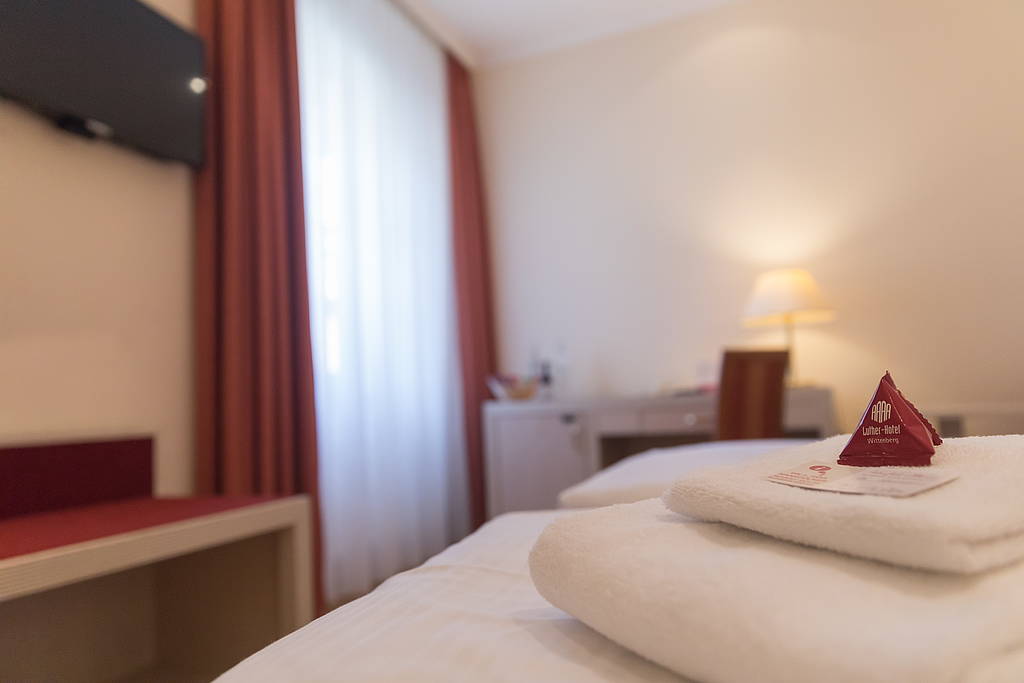